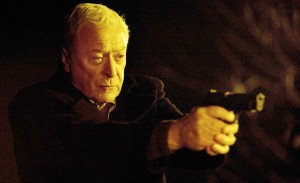 I saw this movie more than a year ago, when it was first released. I had some particular thoughts about it then and I find that it’s still on my mind. I think that’s because I felt that it was, in some ways, a significant film. Not a film I enjoyed or admired, far from it, but significant nevertheless.

‘Harry Brown’ is director, Daniel Barber’s first feature –  and stars Michael Caine in the title role. The story follows Brown, a Royal Marines veteran, who lives on a South London housing estate where life is constantly made dangerous by youth gangs whose violent behaviour is fuelled by drugs. The film’s opening scene contains a graphic portrayal of a random, apparently motiveless shooting.

Brown leads a largely solitary life, punctuated by visits to his comatose wife in hospital and occasional chess games in the local pub with a friend, Len Attwell (David Bradley). When his wife dies suddenly and Attwell is murdered by the estate gang, Brown decides to take matters into his own hands.

What follows is Brown’s descent into a Dantesque world of urban decay, drugs, violence, betrayal and degradation as he seeks vengeance for his friend’s murder. And as Brown pursues his vigilante justice, he meets a gallery of characters, each more despicable than the last. The police, too, are portrayed as being unsympathetic – as much bound up with their own internal politics as they are dealing with the increasingly volatile situation on the estate.

I’ve read that this film has been compared with Clint Eastwood’s ‘Gran Torino’, which was released a year or so previously. That film is far from Eastwood’s best work but, like most of his own films, it does have a head and a heart and examines the societal base of prejudice, the inner lives of neighbours confronted by violence and in its conclusion, offers redemption through sacrifice. ‘Harry Brown’ does not attempt any of this. It is shallow and manipulative in its attempts to disguise its own reactionary ideological base. Our only responsibility is to punish the irresponsible, it insinuates.. There’s a scene where Brown is discussing with a police officer his army service in Northern Ireland. Brown says,’ Those people were fighting for something. A cause. To them out there , this is just entertainment.‘ What we’re supposed to glean from that, presumably, is that Brown had some sympathy for the people he was killing in Ulster but not for the youths that he’s killing in his neighbourhood. I think that idea is obscene.

And on the subject of obscenity, Barber and scriptwriter Gary Young have clearly seen ‘Sexy Beast’, ‘In Bruges’ and other Brit crime films and noted that it is de rigueur to include a conversation where ‘cunt’ is used repetitively in a conversation. Such an obviously exploitative and derivative choice only goes to further demonstrate the film maker’s intention to appeal to prurient interest.

By the time this film lurched its way to its entirely predictable conclusion, I was heartily sick of it. I had lived on an estate like Brown’s at a time when the problems were similar, where crime was commonplace, shopowners barricaded their windows at night and prospects were bleak. But citizens responded through community initiatives and by accepting responsibility for themselves and their neighbours. It was tough but it was not hopeless. People did not submit to baseness because they felt there was no alternative. They rose above it. And that’s why ‘Harry Brown’ is significant. In advocating despair, unwittingly,  it reminds us of hope. 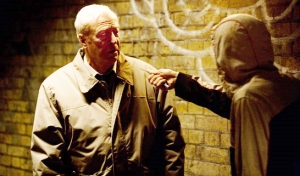 This entry was posted in Film and tagged Harry Brown, Michael Caine. Bookmark the permalink.