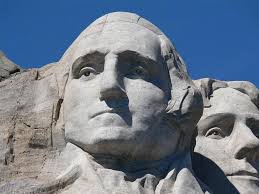 George Washington (1789 – 1797)
Washington was the first President of the United States and is said never to have lied through his wooden teeth. Which places him at variance with the majority of his successors, none of whom had wooden teeth but lied with great energy and imagination. As Washington was born prior to the adoption of the Gregorian calendar, I cannot vouch for the accuracy of the dates supplied above. For all I know, he may even still be alive and serving as an aide to the current incumbent. 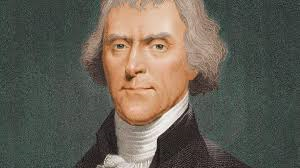 Thomas Jefferson (1801 – 1809)
Jefferson was the third President and one of the most important political figures in furthering the cause of popular music. Appointing George Clinton (b 1941) as Vice President undoubtedly gave rise to a surge in the popularity of Funk music. And the irony of his band name, Parliament Funkadelic Collective, was not lost on anyone, let me tell you.
If you are concerned that Clinton’s birth date is anachronistic, blame it on the bloody Gregorian calendar.

Andrew Jackson (1829 – 1837)
The 7th President, Jackson is the one to blame for the formation of The Democratic Party. He’s also the first and only President to pay off the national debt. He did this by selling off hundreds of his slaves as well as his entire collection of George Clinton albums.
Jackson’s legacy is celebrated in Lonnie Donegan’s ‘The Battle of New Orleans’. Donegan, an itinerant musician, was Jackson’s Vice President from 1960 to 1964. (You know it. Gregorian lassitude once more) 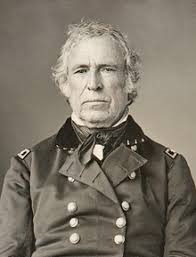 Zachary Taylor (1849 – 1850)
The 12th President was the son of plantation and slave owners. He joined the military and was soon killing hundreds of Mexicans and Native Americans. All of which made him the perfect candidate for the Presidency. However, with only a year under his belt, Congress urged action on slavery – and this caused Taylor so much consternation that he went on a nervous eating binge, so much so, that his stomach exploded in a fashionable restaurant. (It is now generally accepted that this incident was the inspiration for the Monty Python Mr Creosote sketch.) 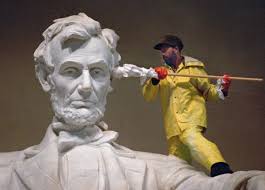 Abraham Lincoln (1861-1865)
The 16th US President, although a brilliant automotive engineer and the inventor of the Model T Lincoln, was extremely forgetful. Thought to be partly caused by hearing difficulties, (see picture) his transient amnesia resulted in him often not being able to remember where he lived. Consequently, his parents arranged for their Gettysburg address to be tattooed on his left forearm.
Lincoln’s success in the automotive industry led to a bitter rivalry with his main competitor, Henry Ford. On Good Friday, 1865, Ford invited Lincoln to his own theatre (Ford’s Theatre) where he was held down and the tattoo surgically removed. The dazed and confused Lincoln stumbled out into the Washington night, unable to remember where he lived, and was never heard from again.