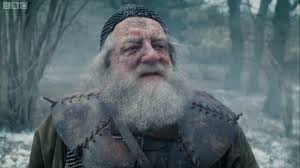 ‘Tis not due yet. I would be loath to pay Him before His day. What need I be so forward with Him that calls not on me? Well, ’tis no matter. Honour pricks me on. Yea, but how if honor prick me off when I come on? How then? Can honour set to a leg? no. Or an arm? no. Or take away the grief of a wound? No. Honour hath no skill in surgery, then? No. What is honour? A word. What is in that word “honour”? What is that “honour”? Air. A trim reckoning. Who hath it? He that died o’ Wednesday. Doth he feel it? No. Doth he hear it? No. ‘Tis insensible, then? Yea, to the dead. But will it not live with the living? No. Why? Detraction will not suffer it. Therefore, I’ll none of it. Honour is a mere scutcheon. And so ends my catechism.’

These words are spoken by Sir John Falstaff at the commencement of the Battle Of Shrewsbury. The troubled king, Henry IV (Jeremy Irons), is about to take on the Percys of Northumberland and their allies in the latest rebellion against Plantagenet rule.
Director, Richard Eyre, has constructed an intimate account of the making of a king, Prince Hal (Tom Hiddleston), by having him act as the pivot between two contrasting worlds; the royal court at Westminster and The Boar’s Head Tavern in Eastcheap. And everyone we meet seems to have a point of view about honour. Falstaff, Hal’s drinking companion, sees it as a worthless label – ‘a mere scutcheon’. The king is troubled by his own lack of honour, having deposed another king who ruled by divine right. And Hotspur, the rebel, is consumed by the quest for honour – so much so that his judgement is blinded by it at a crucial time. This production has Hal weaving his way through the machinations of his father, the king, the boastful and self-serving posturings of Falstaff and the noble, but rash, actions of his adversary, Hotspur. By the conclusion of Part II, Prince Hal is ready to become Henry V, the product of his own tutorial.
A brilliant cast bring Shakespeare’s play to the screen, making the text – and therefore the ideas – accessible in a way that creates a new standard I believe. Simon Russell Beale as Falstaff brings  a rhythm, a cadence to Falstaff’s lines that open up his character, make him transparent – not only to Hal but us, the audience, as well. The argot of Eastcheap is a hip hop away from rapping in the ‘hood. Shakespeare wrote for the pit and everyone connected to this production plays it that way. I mentioned in my earlier review of Richard II, the first in this series of  The Hollow Crown, the sense of visual narrative allied to a deep knowledge of Shakespeare that had created an organic account of history in the making. This splendid production has built on that fine beginning to bring us an intriguing and satisfying account of the making of a king. 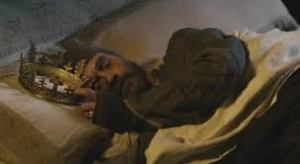