I’m on the pier at Brighton. There are so many of us. There’s some anger. Speed. The greasers – rockers – are on the beach surrounded by cops. A chant goes up and then we’re running. Screams, adrenalin, fear. A rush. A deckchair flaps and cracks through the air into a car. I look at Presley -‘Elvis’- and somehow his nose is bloody and swollen. It’s not been a good day for him. His Lambretta SX has been attacked and most of the mirrors smashed or missing. His parka has been ripped and the fur around the hood hangs loose like a Davey Crockett hat. I’m okay though. Hand hurts where I smacked some Gene Vincent-looking rocker. But I’m okay. Lead a charmed life, don’t I? On the way back to London, at a pub, some girls show us their bruises, tell us about their mates that got arrested. We watch it all on the TV News and laugh. The locals keep well away.

We Were Well Off

I’m sitting in the office of the Principal Clerk of the Corporation of Lloyd’s. His name is Phillips and he sees me looking at the Adam fireplace and smiles. I’m there because I’ve passed their entry examination and don’t have a criminal record. He’s impressed with my academic achievements but my curriculum vitae contains something that makes him take off his glasses and lean forward, more intimate like.

‘You were a representative cricketer?’ I give him the details, all buffed up especially for the occasion. The phone. ‘Hello, Yogi. Phillips. I have a young man here just right for you chaps. Take good care of him, will you? He bowls off-spin and speaks tolerable French….’ He shakes my hand, ‘Mr Beare is coming up to fetch you. You’ll enjoy working for him. Fifteen pounds and ten shillings a week. All right?‘

Fifteen pound ten! All right? You must be fucking joking you public school tosser. Where do I sign? I wonder how much my mum will want out of that each week?

It’s a wet Thursday evening in October and I’m standing in the polling booth at the school down the road. I’m voting Labour. I’m voting for Harold Wilson. I’m voting so I can feel ‘the white heat of revolution’. I’m voting to get the Tories out. They are ‘yesterday’s men’. I’m voting for my dad because my dad is an old-time socialist who has friends in the Labour Party and he thinks Wilson is ‘just left enough to make a difference’. I’m voting for the first time. I’ve done drinking and sex. Voting makes the set.

I’m in the Rediffusion studios in Kingsway on Friday afternoon for Ready Steady Go! Cathy McGowan comes up to me, John and Jeff and remembers us from the Tottenham Royal the night before. We talk about what a nutter Dave Clark is and she tells us he’s here for this show. We groan.  But it’s okay because Mary Wells and The Yardbirds are on too. She asks what stuff we’ve got and Jeff sorts her out.

John Breton is captain of Lloyd’s first XI football team. He’s really pissed off at Mike and I. I mean, he’s dropping his bundle. We’re impressed at his rage but puzzled by it. It’s a cup tie and we’re 4-0 up with only 15 minutes to go. But if we don’t get back to club rooms, shower and change by 5, we’re going to miss the beginning of Doctor Who. No contest.

The Beatles? Don’t think so. The Who, The Stones, Chuck Berry. For sure. I’m off to see Chuck Berry at the Fairfields Hall in Croydon. Graham Bond and some band called The Moody Blues on the undercard. My new girlfriend says bring an album or something for Chuck to sign cos she can get us backstage. Cool.

I’ve never seen my gran so angry. It’s past midnight and I’ve turned up, drunk, at her council flat in Brixton, expecting a bed for the night. She’s not angry about that though. Don’t I understand that Bess and Bill will be worried about me? Here’s some change. Go and phone. There’ll be a coffee when you get back. Sitting in the cold front room; You’ve got something they never had. Your youth. They had the war instead. Your dad was killing Germans and God knows what else. And your mum was working in a munitions factory. When you came along, your father worked all sorts of hours to feed and clothe you. Put you through grammar school. And look how you treat them. They deserve better than that. Yes, gran.

A word from the author; It’s said that if you can remember the 60s, then you weren’t there. I was there all right and this all happened. But, I can’t swear to exact details and there’s some licence involved. I attended Ready Steady Go! on several occasions and it does all merge a bit. I remember thinking that The Beach Boys were rubbish though. That, I can remember. 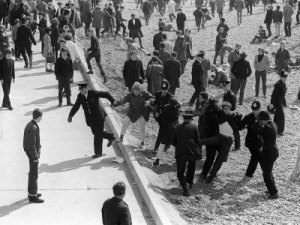 This entry was posted in Bio and tagged Harold Wilson, Mods and Rockers. Bookmark the permalink.